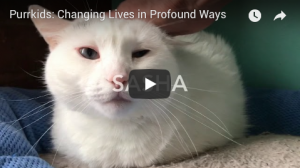 Ever heard of Purrkids? It's a wonderful program that Furkids created to help certain kitties cope with the difficult, and sometimes even life-threatening challenges they've faced. While the cats we rescue can't always tell us about what they've been through - what they've seen and the pain they may have experienced - we can tell when a kitty who needs help arrives and we have a wonderful way to help them cope and find their furever home. Part of Furkids' mission is to "...heal the whole animal, physically and emotionally, restoring its health and its spirit", and the Purrkids program is one… READ MORE >

Furkids recently took in two Chihuahua puppies after a Good Samaritan found them in a dumpster. They were so tiny and frail, and they seemed to be sick. When the puppies arrived to Furkids, the dog shelter medical team went straight to work to determine what was making them so ill. Our vets estimated that the puppies were about 4 weeks old, and determined that they had Parvovirus. These Chihuahua puppies who were thrown into the trash like garbage now had a new obstacle: to survive Parvo.  They were transferred out of the shelter and into a vet clinic so… READ MORE >

Advocate For Our Dogs

October is ADOPT A SHELTER DOG MONTH! Furkids has already found 30 dogs homes this month, even for some "harder to place" dogs like Trooper. Trooper was found starving to death,  left in a crate in the middle of a busy road. Because of this traumatic experience, he had exhibited some behavior that turned potential adopters off, but what those people didn't know was that he was just acting out because he was terrified.  These "hard to place" dogs are animals that have been in our program for some time and have special circumstances that the average adopter may not… READ MORE >

It’s no secret that Furkids is committed to saving as many animals as possible. We are a rescue that isn’t afraid to take on the hard cases… even the FeLV+ ones. Furkids has two FeLV+ suites, one at the cat shelter and one at the dog shelter, which house 17 cats total. FeLV+ cats can live long, happy lives, and Furkids provides them a warm, loving, safe environment to live out the rest of their lives, unless they happen to get adopted (which, unfortunately, doesn’t happen very often).  When a cat is FeLV+, it means that the cat has a… READ MORE >

Lula: A Gentle Girl with a Brutal Past

Lula is a sweet and gentle soul who is the poster-child for neglected animals everywhere. She was found in Dacula totally emaciated and with a terrible skin condition. Lula was days, if not hours, from death. A Furkids kennel tech brought her to the dog shelter and we immediately got to work to save her life.  Our vet told us that her nails had grown into her paw pads, but gentle Lula allowed her to cut them without even flinching. Her skin scrape came back negative for mange, but she will be starting medication to help her skin heal as… READ MORE >