The Miraculous Recovery of Charles Xavier 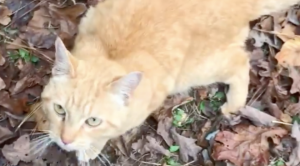 About a month ago, we came across a video from The Grey Project, an organization that helps feral cats in Cherokee County, along with this post: “Please - begging for help or for rescue!! This is the second day that we have seen this kitty at one of our locations. He does not seem to be familiar with the other cats. He is friendly.” Misunderstood and unloved, he was obviously dumped at this cat colony with no concern for him at all. He was simply thrown out like trash. He had no chance to survive outdoors on his own, and… READ MORE >

It's been another fabulous year here at Furkids! As we reflect on 2018, we'd like to share some of our favorite moments from the past year. None of this could have happened without help from our supporters like you. Check out our Top 10 List for 2018: #10 Wagons Full of Donations  Miranda Lambert chose us as the beneficiary of the Atlanta stop for her "Fill the Little Red Wagon" initiative. Concert attendees were so generous, filling up an entire moving van of donations of food and beds and toys to make our shelter pets comfortable while they wait for their forever homes!… READ MORE >