This week a fond friend of Furkids and of cats everywhere passed away.  Our thoughts are with his family.  He will be sorely missed. 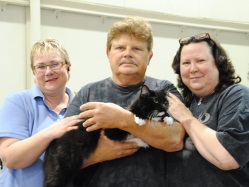 Nick was very impressed with the mission and work of Furkids and became an ardent supporter.  He was instrumental in helping Renee and our staff learn the ropes at cat shows.  Meanwhile, he started showing his adopted Furkid Leo -- who went on to become a Grand Champion in the Household Pet category.

Nick and his wife, Judy, often stopped by the shelter on their way to a show just to say hello and to let the staff see Leo and Boots.  He once saved a hungry little cat outside a Waffle House near the state line along I-20.  Our very own Carol Purdy arranged an exchange meeting to bring the kitty back to Furkids.  That cat was soon adopted into a loving home.

This past October, a number of staff, including Renee and Carol were blessed to see Nick, his wife, and the cats at the Party Cats Cat Show.  Everyone was happy to see each other and it was hugs all around. Nick and Judy spent time with Renee, Carol, and all of the volunteers. They cheered on our cats as they began to place in several categories. As show patrons admired Leo, Nick was quick to let everyone know that Leo was a Furkids adoptee.

Nick loved all of his cats and they loved him. He loved everyone. He loved being part of the TICA family. He believed in Furkids' mission and was glad to have gotten to know the Furkids family.  We are honored that he counted us among his friends.

Donations in honor and memory of Nick can be made here.