A TwoFur is Twice the Joy

Posted on Monday, May 13th 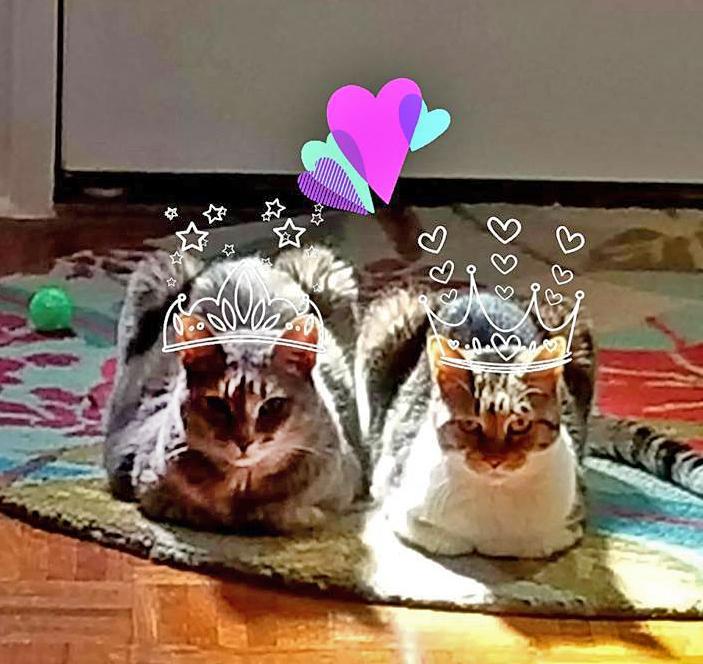 Michaela, a gray, green-eyed kitty was found in the garden center of a local Home Depot in 2014. She was terrified when she arrived at Furkids and was placed in a room with another shy kitten, a brown tabby named Bella.

Shy kitties are often overlooked, so the two shared the same space for several years. Over time, they gravitated toward each other, finding comfort in each other’s presence. When one of them was removed from the room for vetting, the other would anxiously pace the floor until her companion was returned.

Michaela and Bella were undeniably bonded, a relationship that enabled them to thrive in a shelter environment. However, their bond also presented a challenge when finding them a forever home because potential adopters don’t often plan to make multiple adoptions — they’re typically looking for one pet only, making bonded pairs difficult to place.

However, in 2017, Michaela and Bella finally found their match. “They were adopted to a wonderful family who wanted two shy cats who had little chance for a home,” says Terri Brunson, Furkids’ cat shelter foster home maanger.

Now, Michaela and Bella are living their best nine lives just as they’d always wanted: together. 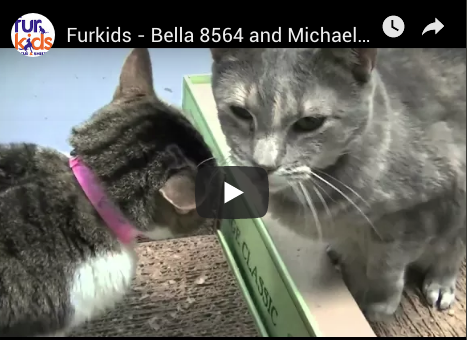 Cats are social animals, so it’s not uncommon for them to play together, cuddle up with one another and even groom each other, and it can be easy to assume that felines that engage in such behaviors are a bonded pair. However, there’s often more to a bonded pair than meets the eye. “You have to be able to look beyond the obvious to see a real bond,” Brunson says.

Because bonded pairs can limit the felines’ adoption potential, Furkids carefully considers whether a pair of cats is truly bonded by paying close attention to how the pair interacts, especially adult cats, which are more likely to form bonds.

“For adults, bonding is not simply because they came from the same home or litter or hang out together, but more so that they seek each other out, remain together more often than not, show a definite connection to one another,” Brunson says. “It’s hard to define. It’s really more of an instinct. When someone asks [us] to bond a pair, we ask, ‘What are you seeing that tells you they are bonded?' More often than not, it’s not a true bond. However, if we intake a pair and the person indicates they are bonded, we honor the request, and monitor them.”

Bonded pairs of cats are truly a package deal. In fact, they may be unadoptable on their own because when separated, they suffer. They may exhibit signs of depression and anxiety, show destructive behavior, quit eating or even succumb to illness. They’re truly grieving the loss of a close friend just as we would.

But while bonded pairs can be challenging to place, the reality is that once these cats find their forever home, the adjustment is often easier for both of them because of the comfort they provide one another. Plus, there’s the added benefit that bonded cats always have a playmate, so they’re less likely to experience boredom or anxiety when left home alone. Bonded pairs also remain more active and are less likely to engage in unhealthy or destructive behaviors such as overeating or eliminating outside the litter box.

Of course, there are certain adorable benefits for the adopter of pairs, according to Brunson. “You’ll have a lot of fun watching them together, sleeping, playing, grooming,” she says.

Best of all, when you adopt a pair of cats - bonded or not - you’re doing twice the rescue and saving two shelter cats. And, as Michaela and Bella’s family can attest, you’re also bringing home twice the joy.

To see the bios of the bonded pairs currently at Furkids, visit our Adoptable Cats page and search on “bonded.”